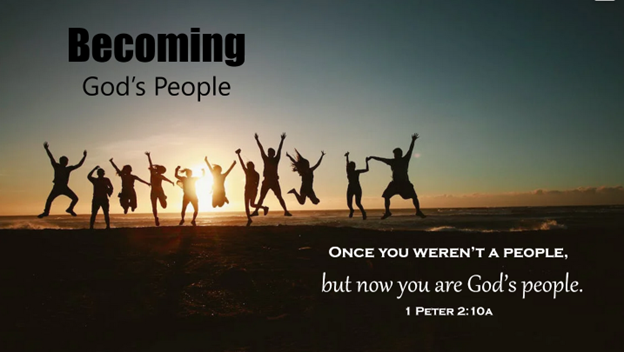 5 The Lord saw that humanity had become thoroughly evil on the earth and that every idea their minds thought up was always completely evil. 6 The Lord regretted making human beings on the earth, and he was heartbroken. 7 So the Lord said, “I will wipe off of the land the human race that I’ve created: from human beings to livestock to the crawling things to the birds in the skies, because I regret I ever made them.” 8 But as for Noah, the Lord approved of him

20 Noah built an altar to the Lord. He took some of the clean large animals and some of the clean birds, and placed entirely burned offerings on the altar. 21 The Lord smelled the pleasing scent, and the Lord thought to himself, I will not curse the fertile land anymore because of human beings since the ideas of the human mind are evil from their youth. I will never again destroy every living thing as I have done.

22 As long as the earth exists,
seedtime and harvest,
cold and hot,
summer and autumn,
day and night
will not cease.

1.What does it mean that God “regretted” the decision to fashion humanity (5:6), does that mean God wished humanity had never existed, had been created differently, was not central to the earth’s function?

2. How do you feel about the rest of the passengers on the ark being saved because of Noah rather than their own righteousness?

3.  Why is God concerned with cursing the fertile land after the flood (8:21) and not with humanity or animals?

4. How does this depiction of God’s violence impact me? How do I explain it, and reconcile it to the loving and long-suffering description of God so often used in the Bible?

In 6:5 we are told “all humanity” is corrupted only to be told that Noah is righteous 6:8, this shows us that the author is clearly using hyperbole to emphasize general points about the state of humanity and creation in this story.

The order of life in v7 is a reversal of the order of creation in ch. 1, this combined with the word often translated “corrupted” in v12 discussing humanity is the same word translated “destroy” in v13 implying that God is not simply punishing the earth but accelerating the natural consequences of humanity’s corrupted state.

The wind that blows across the flood waters in chapter 7 are a reference to God’s creating Spirit.

For more Background check out my video here

The story of the Flood can be extremely controversial in our culture, particularly for some for whom the picture of God bringing destruction on the earth is horrifying and proves the Bible false. I also find that far too few Christians sufficiently pause at this scene of destruction and think through what we are being told about humanity, creation, and God’s relationship to both. Do we ever sit and meditate on the popular secular question, “Why would God kill so many innocent people (read children)?”Rather, many Christians I know simply brush this objection aside with something like, “The Bible says everyone was evil therefore they deserved it.” But is this a valid answer to the objection, particularly when Paul says in Romans that we are all sinners deserving death and yet we received mercy? How is it we have received mercy and God gives Noah’s generation death and destruction? It is possible, like some scholars, to notice the hyperbole in 6:5 that “all” humanity was wicked and say much of the story is hyperbolic for effect and the actual scale of the flood was much smaller, or that this story is simply post hoc moralizing of a catastrophe. But I do not think these explanations help us any more than blindly accepting the violence of the passage as normal. Rather, I think that reflecting on the violence of this passage leads to its real thrust and allows us to see God’s true character.[1]

Genesis 3:1-6:4 depicts a world that is increasingly evil, to the point that the “Sons of God” (whoever they are), beings who are supposed to act like God, are corrupted. The story of Adam’s descendants concludes with this scene that all creation is rebelling from God’s purpose and evil is proliferating. The Story of Noah begins in 6:5 with God’s recognition of the evil and plan for dealing with it. God’s plan is to allow evil to run its course and swallow creation in chaos. Chapters 6 & 7 are full of allusions and especially reversals of Genesis 1, the story of God creating out of chaos. The Flood story then is God accelerating the consequences of evil. Why would God do this? Because justice for creation demanded a fresh start. What is interesting to me about the Flood story is that God chooses to be a part of the process, or to use the phrase “get his hands dirty”. God is not completely passive, willing to watch from the sidelines, as humanity destroys creation. Further God laments, God’s regret in 6:6 is about the evil in the world, this includes the harm that evil is causing to the innocent within the world. I read this verse as God experiencing grief and anger over how evil is ruining what was supposed to be a good and innocent creation. We might ask why God would feel the need to unmake creation, but the texts is driving us to the realization that humanity was pervasively evil. And though Noah was not perfect by any stretch, Noah will at least listen to God where no one else seems to do so.

God recognizes that justice requires a reset to creation, and though there might be individuals who do not deserve to be caught up in the flood, justice must be done on behalf of all creation. The picture Genesis creates of the flood is one of God acting out of remorse on behalf of the goodness of creation, to remove the evil that has polluted it. God is present in the world not in an arbitrary or condemning way, but as the honest judge. The Flood story shows us both that there are natural consequences for our sinful and destructive habits and that God is not about punishing people but restoring creation. God does not destroy to punish but so creation can be remade. We see this in the fact that as soon as the earth is lost to the waters of chaos God is recreating in the wind blowing across the water. Further we see that God plans after Noah lands to take steps to help restrain humanity’s evil so that there is never again a time when creation will be overcome by it. The story shows us the true potential for sin to ruin the world and the depth of God’s character; we have the potential to destroy everything and yet God is still there helping to make right what we destroy.

[1] I am indebted to Daniel Hawk’s The Violence of the Biblical God for helping me think through these issues.